The Red Wines of the East Coast have never gotten the love that their White Wine counterparts have received over the years and in most cases for good reason.  But that may change if an old Eastern European grape can live up to its promise of becoming the foundation on which the future of eastern Red Wine is built.  The wine grape that I am talking about is Saperavi.  This grape variety originated in the Georgian Republic of Russia and features a dark skin with

pink flesh.  It is a teinturier variety of grape, meaning unlike most grapes that have uncolored flesh and produce clear juice a teinturier has red-tinted flesh that makes a vibrant richly colored wine. Saperavi vines are grown throughout the area connecting Asia and Europe know as the Caucasus and in various regions of the former Soviet Republic. Sapervai has long been viewed as an ideal ingredient for cheaper blended wines but in recent decades it has been proven to be capable of producing a varietal of high quality.  The best Georgian-produced Saperavi comes from the Kakheti Region that is near its eastern border with Azerbaijan.  These Georgian-made wines are available in the U.S. but you will have to do some searching to find them. The fact that this grape is late-ripening and thrives in a cooler climate while producing generous yields without sacrificing much in quality is the reason that vintners in the Finger Lakes and Central Pennsylvania are exploring its potential within their vineyards.  I have mentioned in earlier posts the pioneering work done by the Standing Stone Vineyards and Winery with Saperavi but I have recently learned of a producing vineyard in Lewisburg, Pa.  Chuck and Daneen Zaleski owners of Fero Vineyards and Winery have produced a varietal from Saperavi grapes grown in their Central Pennsylvania vineyard and made exclusively in their Lewisburg winery.  Chuck Zaleski at Fero and Marti Macinski at Standing Stone are on the cutting edge of this exciting reinvention of an Old World stalwart.  I am excited to have the chance to follow the evolution of the Saperavi wine grape in the Eastern United States from the persceptive of the wine makers themselves. For more information about these two fine wineries visit their websites at: www.standingstonewines.com  and  www.ferovineyards.com 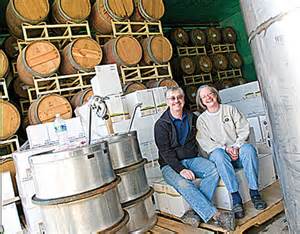 4 thoughts on “Saperavi: The Next Big Thing?”

What do you think? Cancel reply

This site uses Akismet to reduce spam. Learn how your comment data is processed.